Food, knitting, science, a glimpse of the things I am passionate about
Leave a comment
Posted by passionsoftheheart on July 29, 2018 in Food

So I received a bounty of ingredients from a friend recently, they work for a kitchen that was closing for a couple of weeks and they cleaned out their walk-in and just gave away the fresh food, as they would be bad before the kitchen reopened. So I am staring at a fridge full of heavy whipping cream, green onions, pears, tomatoes, garlic, cilantro, and sour cream. What to do, what to do?

Sour cream is easy, goes in baking, mexican food, dips, etc. Everything else posed challenges to use up before it went south. Here’s my adventure in Pears.

I have about 20 bosc pears. They are old enough to not look super pretty, but for the most part firm and crisp. In searching for inspiration, I came across “pear butter”. As I am a fan of apple butter (growing up in New England it was very common), I’d thought I’d give pear butter a try.  I ended up using this recipe that allowed me to use the crockpot. Summers are hot, and turning on the stove for a few hours needs to be avoided, as paying for the heating of the stove and the cooling of the house simultaneously makes me feel a little ill.

I followed the recipe, except I used allspice instead of pumpkin pie spice and used less sugar.  I know it makes me weird, but I don’t really like the pumpkin pie spice blend outside of pumpkin pie.  It is soo distinctive in my head that it makes it immediately jump to pumpkin pie, which isn’t what I was going for here. The sugar was really reduced to 1 cup. I just wanted the pear-ness of it all to come out, and I know that pear can be a delicate flavor. Also, shout-out to the author of the recipe , Tammi (I assume), she handled the haters on her comment page with a patience and civility I don’t think I could match.

Score: Used up 10-11 pears, had a delicious and easy result!

After everything was cooled down, it was absolutely enchanting! But I still had pears left, so the saga continued.

The second pear recipe was a Pear Custard Pie. So easy and it worked well! Served as breakfast all week. The real star of this recipe is that you don’t have to do a crust! The custard really does firm up and take care of itself. Also I love cooking in cast-iron, so this combined two things I like! As I pretty much can’t follow a recipe exactly, I did add 1/2-1 more pear than the recipe required (I have a lot to use up!), but the custard did still nicely balance it all out.

Score: 4 more pears down, leaving me with 5.

The last recipe I found to use is a pear bread. I figured, well you can flavor those fruit breads with anything, so why not? I ended up using a recipe for Cardamom Pear Bread  because that sounds absolutely yummy. And the picture (posted for your pleasure) just looks awesome. 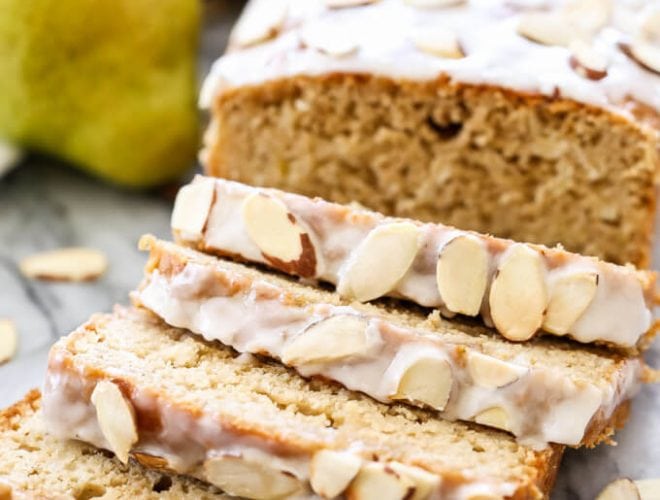 So the recipe doesn’t actually call for much pear usage (1 cup), but the pears had been sitting for a spell and by the time I peeled and cut off all the bits I didn’t like, it used up most of the remainder. The 1.5 left were just kinda too soft (I hate mealy pears), so no big loss. This recipe I followed, but more like followed the spirit of. Now, I will caution you, if you are not an experienced baker, follow recipes! I have been baking since I was about 4-5 and so I frequently know the consistency of batters I’m going for, what can and cannot be substituted with impunity, and how to compensate for more/less of certain ingredients.  I substituted all-purpose bleached flour (King Arthur) for the whole wheat pastry flour, 1/4 cup sugar for the 1/3 cup honey, 1 egg and a little meringue powder for the 1 egg+1 egg white suggested, and cut my pears up into slivers instead of shredding them.  I also used some homemade lemoncello for the pear juice, as my fresh pears didn’t have juice and I don’t keep juice in the house.

My batter was a little thicker/tighter than I knew it needed to be. But I planned for that. I put 1/2 the batter into the pan, spread it well, then added about 1/4 cup of my pear jam. Swirled that around with a spoon, keeping away from the edges, then added the remainder of the batter, leveled it out, then added a few more spoonfuls (so exact, I know) to the top and swirled some more!

The bread cooked the same amount of time listed in the recipe and is moist and delicious. There was a little leakage of butter out here and there, but a quick run around the edges of the pan with a butter knife while it was still hot seemed to take care of it sticking to the sides. I didn’t line my pan with parchment, because I don’t like to and my loaf pan is non-stick, so I’ve never had problems with it sticking to the pan. If you are worried, add the parchment.